Standard. Colors and patterns for NFO

1. Tables for coat colors, patterns and colors of admitted eyes.

1. The recognized colors for a Norwegian Forest are:

2. The patterns that  can be in the Norwegian Forest coat are:

3. The color of eyes may have:

4. The colors not recognized for the Norwegian Forest cat are:

5. The patterns not recognized for the Norwegian Forest cat are:

Once identified, we will comment the colors and patterns that are supported and also going to illustrate them:

The red (EMS Code, d) may be solid or tabby theoretically based on their genotype, but in practice, although carry both alleles of solid (non-agouti aa), all red (and dilutions) shown in phenotype always as tabby. To know whether a red cat is solid, it should be noted that the short hair around the eyes and inside the ears. The tabbies color surrounding the eyes is white, while the solid is colored, and the interior color of ear hair, short hair close to the edge, in the tabbies is white and has solid color.

The blue (EMS Code, a) is the dilution of black color, ie when the genotype cat has both alleles of dilution (dd), it is a blue cat, who phenotypically is shown in gray, and can be solid or tabby.

The cream (EMS Code, e) is the dilution of red, which has a color like a stained with coffee. It may be solid or tabby in theory, that being the dilution of red so does that to it, and to identify whether it is solid or tabby cat have to look in the eyes and ears well. If the cat by its pattern of white, had colored white eyes, you would look in the ears, unless that had white too, and then I could not know without doing genetic analysis, or wait for the colors to their descendants they could present.
These are the colors can be found in the NFO, but nevertheless, we must not forget that red and black are colors whose genetic inheritance is sex-linked, being located on chromosome X. Females have a pair of X chromosomes and can inherit the red and black color at a time, while males have only one X (the other is a Y) and can only inherit one color or another (although there are exceptions, see article about the tricolor males). Therefore cats are usually have two colors, have both black and red and are called "Torties" sometimes the tabby torties without white are known as "torbies". The combinations that may occur are:

The black torties (EMS Code, f) may be solid or tabby. Solid, do not forget, show the tabby on red colored.

The blue torties (EMS Code, f) are the diluition of black torties, and may be solid or tabby. Solid, do not forget, show the tabby on cream colored.

Amber color is the result of a genetic mutation that occurs in some specimens of Norwegian Forest Cat, therefore is a specific color that occurs only in cats of this breed. As it is a color that has its peculiaritiesis better than we explain how color appears differentiating between solid and tabby.

Amber is also affected by the dilution factor.

The agouti gene causes them look striped cats, that produces differences in the color tone throughout the hair, to stripes, as we can see in the picture below:
The hairs that are in dark areas are colored in the same tone evenly, while those in the lighter areas are those stripes. 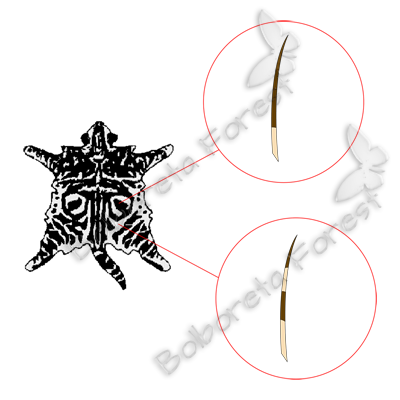 The agouti gene is dominant and non-agouti is recessive, ie that one allele agouti (A) is sufficient striped appears at the phenotype, while non-agouti (a), or also known how "solid", it must contain two alleles (aa) for the cat shows no scorings or drawings. In practice it means that there is less solid than tabby cats.
Not all cats have stripes in the same way, there are several types of striped, which are:
- Tabby Blotched, (EMS Code 22). The drawing blotchy are long like the drawing of marble.
- Tabby Mackerel: (EMS Code 23), literally meaning "mackerel" because fish has the same striped thinner than the blotched over the body (EMS Code 23) vertical lines.
- Tabby Spoted: is mottled (EMS Code 24). We do not know where it comes from genetically the spotted. A cat that has among its ancestors cats blotched, his spots tend to be larger than the one who has cats mackerel pattern, but sometimes have large spots and some stripe, making it difficult to know.
- Tabby Ticked: It is dotted marked (EMS Code 25). Also known as Abyssinian tabby. In the Norwegian Forest cat it is not a very common tabby.

- Tabby Undefined: (EMS Code 21), is as plus tabby cat has the gene of white spot (S) in its expression Harlequin (02) and Van (01) and showing tabby drawing is not enough to know what is the corresponds tabby.

The rufisme is a gene that affects the color variation of the tabby cats. Rf gene, and determines, for example, if a black tabby tend more to brown or gray, if a red cat will be stronger paler red or orange. Depending on the amount of alleles possessing Rf genotype, cat will more or less altered in color. It is believed that this gene undergoes codominance.

It is not just a color, but are two genetics factors, one is dominant, the "I", which inhibits or alters the production of melanin from the hair shaft, one white part or grayish and the rest of the color of the cat , getting your cat in silver and "cold" display. Depending on whether the cat is striped or solid is called differently. For cats tabbies (scratched) is called Silver (Silver) while for solids is Smoke.

The other genetic factor (with a current controversy as to whether this is a factor or a gene), which is incompletely dominant and is represented as "Wb", cooperates with the agouti gene (which produces the tabby), their function is the band colorless hair from the root is longer or shorter. It affects both cats inhibitor factor, which are cats known as "Silver" and affects cats without the inhibitor gene, these cats having lighter colored hair from the base, as if "erased" the dark side of tabby, showing a golden or peachy. These cats are known as "Golden."
When we have a Norwegian Forest combining factor inhibitor, with Wideband, as long the white band, we can talk about different types of Silver. This is caused by the gene / gene factor Wb is called Widening of band which means "increased the band or the widening of the band", also called "Gen Chinchilla". This gene / factor appears to have no effect on cats solid smoke, but it is true that there are smoke cats (solid inhibitor factor) with different lengths of the light part, and it is unknown if they actually respond to this gene / factor , or other. Depending on the number of alleles that are present, producing:
- Silver Tabby cats (EMS Code s), in which the gene / Wb factor and having the inhibitor I present is not present, they have a very small white band. Being 2/3 color hair.
- Shaded Silver Cat (s EMS Code 11), in which one allele of the gene / Wb factor is present and has colored from just over 2/3 to 1/3 of the hair.
- Cats Silver Shell (EMS s Code 12), (also known as Chinchilla), which has both alleles / Wb factor, the hair will be white in almost all of it, having only colored part octave, 1/8.
Table with representative picture of the different types of silver:
For cats Silver Red and Cream (EMS code NFO ds and NFO s), from the pattern Shaded (Code EMS NFO ds 11 and NFO is 11) and also the patron Shell (EMS code NFO ds 12 and NFO is 12)He is known to them as "Cameo". Being Norwegian Forest Red and Cream Cameo SilverShaded or Shell.

The white color in cats is not a color itself, is the absolute lack of color. A white cat is not producing melanin. This lack of color is produced by a dominant gene, the W which inhibits melanin production throughout the hair. The cat will have some colors and patterns on its genotype, but the target gene, the hidden completely, so it is an epistatic gene. Whites at birth can have a stain overhead, called "beret" and is of color masking white cats. As they get older, they lose it, it is the only way to know at a glance, what is the actual color of the cat.
The eyes of cats have the gene for white W can have yellow eyes, copper (or orange), green or blue, and also have one of each color (in all combinations of above colors), which is known as "odd eyes" (EMS Code 63).
The White Cats tend to be deaf by atrophy of the organ of Corti in the inner ear. Cats with blue eyes are more likely to be deaf than those who have yellow and copper, but there are white cats with blue eyes are not deaf, and dogs that are presenting themselves in the eyes of these colors. Deafness may affect only one ear, which is normally blue. It is believed that the W gene, linked to blue eye, and the lack of pigmentation produces a possible lack of development in the ear, although this issue is not proven. It has been shown that cats that are homozygous for the W gene are more likely to be deaf than those who have only one allele W.

Cats may have in their body without it white fully cover them, a number of gradations. We will explain to fewer target more. It is the white spot gene, the "ws" is known now that is another version of the recessive allele w not white, and what it does is "stain" the cat with white sides. The amount of white has nothing to do with the cantidfad ws allele having the cat.
Examples of "no specific white" can be any combination.
xamples of bicolor coloration.
Example of "Harlequin".
Example of "Van".
And these are the colors and patterns that can be found in the Norwegian Forest cats.

As already mentioned the colors that can be Norwegian Forest are blue, green, yellow, orange and copper, plus the combination of odd eyes between them. There are different colors within the same color, and this is due to the amount of melanocytes which has the iris, and if they are very active or less.

Both in one color:

The silhouettes are owned by Sarah Hartwell obtained on their website: http://messybeast.com/colour-charts.htm

. They have been cut and cleaned to remove the background by Bea Alonso.

The drawings of profile hair, alhomadillas, nose, eyes and silhouettes and faces for Ragdoll Mitted have been made by Bea Alonso, © Bolboreta Forest. They can be used as long as the original font is named.

This work is under license Licencia Creative Commons Atribución-NoComercial-SinDerivar 4.0 Internacional.